While in Croatia we were able to do a mini vacation with our friends to a beach town called Brela.  Brela is a beautiful beach on the coast of Croatia with mountains as a backdrop.  While you swim you look up and see the mountains that often times have clouds that seem to be just sitting on them.  When you look out you see the many small islands off the Dalmatian Coast of Croatia.

The fam on the beach in Brela, Croatia

We started off the day eating in the hotel breakfast area, and playing with Daniel. After the scrumptious breakfast, we all (10 of us including kids) went back to our rooms and got ready for a quick swim in the Adriatic Sea. Only Keegan, Zlatko, and I went swimming, it was really fun once you got used to the cool temperature. The first day it took me forever to get in but by the time we left I would just jump right in.  Sadly, while we were in the water Keegan and I saw a dead bird’s whole body faced down floating! Very sad/creepy. After showering we got dressed and took the acoommm (a car or van in Daniel’s 2 year old language-he’s very cute) to visit one of Gorinka’s friend’s old house in the city of Makarska.  It was close to the top of a mountain and when you looked up into the mountains you saw the really fluffy airy clouds resting there.  This was a very old house that the man and his wife (who had been born there) had done a lot of improvements on, he was very proud and the house was very cool with an awesome view of the sea and the mountains.  They have tons of olive trees on their property and when they harvest them they take them to an olive oil factory in town and have extra virgin olive oil made.  Toni, Mom, and I thought that at any moment the ‘Cullens’ (from the Twilight series) could come flying down running at lightning speed ;).  We then took the big van (acoommm) to the beach of Makarska. The beach was so much more crowded than the one in Brela (our beach). The families split up and explored on our own.  Our family went and had a quick snack and walked around the city, which is a major tourist site. We then met back up with our friends, who had somehow (beyond me) gotten a spot on the busy beach. Keegan went on this fun plaything shown in the pictures below. You paid a fee and were able to climb and jump on the cool stuff in the water.  He jumped on this mat thing, they call it the blob and moved to the end of it and then another boy that he had been talking to (good-looking by the way ;)) jumped on the other end and Keegan went flying!!! He went at LEAST 15-20ft in the air! My stomach went to my throat as I watched him fly through the air. “SH*#*T!!!!!!!!” screamed my very scared mother. People on the beach clapped and cheered.   He was up immediately and laughed it off, but then he didn’t eat that much later . . .  After that very exciting/scary experience we all headed to the acoommm to put our beach stuff back, we then walked to Gorinka’s friends other house for some dinner. When we arrived we were told that we were going to have a traditional Dalmation prepared dinner. So we had appetizers, fish soup, fish (the main dish) they brought out two huge trays of fish — sardines and some other fish they had made, various side dishes and then dessert. It was a very tasty meal!  Our host was a very kind older man and his wife.  The wife made the food and the man made the ladies jewelry as a gift to take with us.  They were necklaces and bracelets made of shells.  After a great evening we said our goodbyes, and headed to the acoommm. When we got back my family stayed in and watched some TV (English with Croatian subtitles) and then very quickly went ‘nitey nite after a long great day. 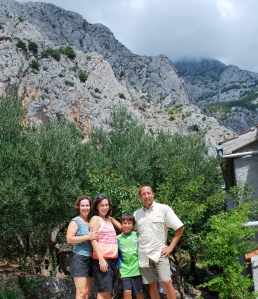 At the mountain house with the clouds riding up above.

The mountain house had a great deck with grape vines for shade. Bronco (the older gentleman in the back with Gorinka) was our host. 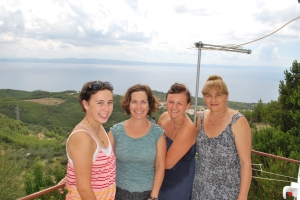 Me, Mom, Toni and Gorinka on one of the decks in the mountain house with the Adriatic Sea and the Brac and Hvar Islands in the background.

Keegan getting ready to reach his spot for his flight.

The busy beach in Makarska - they all got a chance to see Keegan fly! 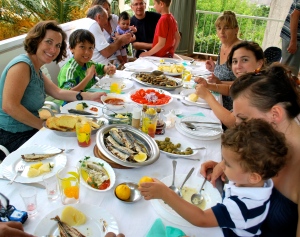 Our great Dalmation dinner in Makarska

After dinner Bronco gave all the women jewelry he had made.

A couple of side notes on Croatia – I loved being with people we knew.  We went to a restaurant on a mountain (everywhere is on a mountain).   Just outside the door were animals and we fed them some bread (shhhhhhhh….). There was also a playground that we could play on! But it was wet so Keegan dried them off with his butt first ;). Then all four of us (Keegan, Brooke, Coleman, and I) decided to run around the restaurant for some exercise. We all did about 10 times around (estimate) before we had to leave.

Playing with the goats on the mountain restaurant

While in Brela Toni told us how she went there growing up and how she would jump off the rocks.  Well one day she took us to the rocks. Let’s just say that the rocks were much higher than we had anticipated. Toni went first and did a ‘shallow’ dive, HEADFIRST! Very nerve-racking. She is so much fun and she’s crazy brave too. Then it was my turn so I climbed up but it’s much scarier on top than on the bottom. So I waited as some other kids came on a paddle boat, they got very close and if I had jumped I would have landed on them. So this one guy went and then Toni told them to hold off cause my dad and I still had to go. So Dad went first (his friend Dr. Rick gave him a 3 for technique but a 9 for facial expression), and then me, my stomach raced to my mouth the minute I jumped! It was very fun to do it but I’m not going to do that again (maybe). 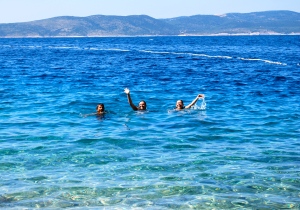 Keegan, Toni and me in the Adriatic Sea 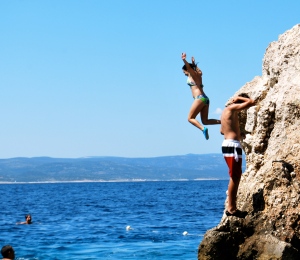 All and all I think Croatia is a pretty great country to visit but being there with our friends made it a really awesome time!