Since the sun sets early here (5:30pm) we make sure to get a head start to try and do everything on that days list of activates before the sun goes down. So starting the day at 8:30am we headed to Beida (Little Petra), it was the same as Petra except not as big. Little Petra is a place where the Nebataeans used to entertain their guests. The Nebataeans built this cool city around 100 B.C. 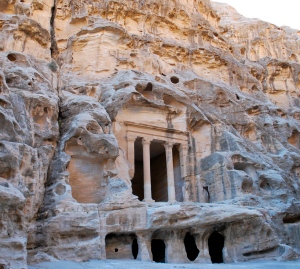 We weren't sure if Keegan was going to make it up but he did.

After that we headed to Wadi Rum for a jeep tour.  Wadi Rum is the largest desert in Jordan.  On the way to Wadi Rum our guide, Hytham (that’s his name), told us about how arranged marriages used to work and how they work today, and about how boys and girls go to separate schools and a lot of other things, it was very informative. Once we got to the meeting point, we switched into our guide’s truck and began our 2½ hour tour of Wadi Rum. Wadi means valley or dry riverbed like a desert and Rum comes from an Arabic root word meaning high or elevated.  So, it was a huge desert with mountains reaching to the sky. The ride was very bumpy, to say the least, I’m pretty sure my bum is still bruised. The first thing he showed us was the Seven Pillars of Wisdom. The Seven Pillars of Wisdom, comes from the Book of Proverbs, 9:1: ‘Wisdom hath builded her house, she hath hewn out her seven pillars’. T.E. Lawrence (Lawrence of Arabia) wrote an autobiographical book about his experiences as a British soldier between 1916-1918. He was the one that ended up naming that mountain range the Seven Pillars of Wisdom. The next stop we had to get out and climb this giant sand hill. When we were going up we started yelling “HELLOOOOO” randomly because the echo was really cool. We raced down the hill, even though going up the hill was deadly the race down made it worth the hike. Continuing the tour we stopped by the rock art on certain walls in Wadi Rum. The rock art dates back to about 10,000-12,000 B.C., if not more. Our guide then drove us to a big tea tent, inside they made us their famous Bedouin tea, the people here say it’s too sweet but we thought it needed more sugar.  As we sat by the fire with our tea and listened to this large Italian tour group ask for more sugar, we saw the face of Lawrence of Arabia carved into a large rock. The tour was a different kind of experience that we can add to our list of experiences on our trip.

A great view of Wadi Rum!

The distance to go up wasn't that bad it was the sand that was the killer.

That's me and my mom running down.

Here's a picture of some of that old Rock Art 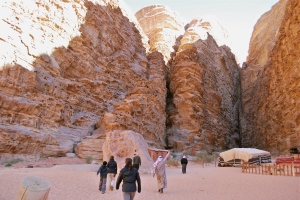 Walking to a Bedouin Tea Tent with our guide. The rock right in front of us has a picture of the face of Lawrence of Arabia carved into it. 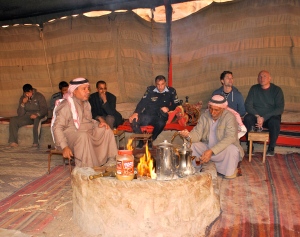 This is a picture inside the tea tent

Meeting back up with Hytham we hopped into the van and drove to Aqaba, which is right across from Egypt on the Red Sea. Once we got there we were pleasantly surprised to learn that we were going to be staying in a nice beach resort while in Aqaba for a few days. Since Aqaba is farther south than Petra, the weather was very warm and we even got to go swimming and get some sun time in, which was a big bonus! There were U.S. military personnel also staying at the resort with us, they told us that they came from Oman and have a few days off before heading up through the Suez Canal to a Naval Station in Rota, Spain. We could see their large ship from the beach. It was great to see all the different U.S. men and women together just laughing and having a good time. Keegan and my dad even played volleyball with a bunch of them.  I know what they are doing is serious. I guess I’m starting to better understand that we have a great melting pot of many different types of people in the U.S. and I like that.

We could see the US military ship from the beach 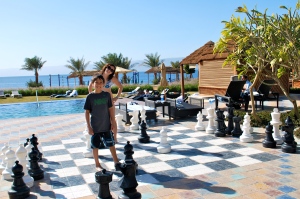 Here we are just having some fun