We are on our final week in Thailand and we have had a great experience as you have read.  We spent a few nights in Bangkok after Chiang Mai before we journeyed to the beaches of Phuket.  While we were in Bangkok we took a boat cruise through the downtown area on the Chao Phraya River. We were able to see some different temples from the boat as well as some barges and many funky boats.  It was very cool to see the city from this point of view.  We were able to see some homes of some of the locals and some of the huge high-rises. As many of the cities we encounter there are the very rich and the very poor. Bangkok is the largest city in Thailand with approximately 12 million people it is known as Krung Thep meaning “city of angels”.  While Kendal and I kept our eyes open for Ryan Gosling, Steve took advantage of an opportunity to attend Muay Thai fights at Lumpini Stadium and we hit the popular “Chatuchak Weekend Market” which holds an amazing amount of “fakes” of whatever you can imagine. 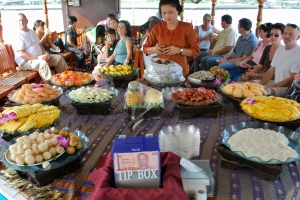 A little snack on our cruise 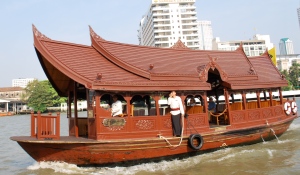 One of the funky river boats in Bangkok 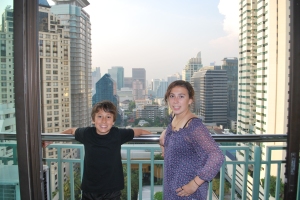 Yes we are on a yearlong trip but is it a vacation???  Well our week in Phuket was a real vacation.  Phuket is a small island in Thailand.  It was hit hard by the Tsunami in 2006 but is still luckily a huge tourist destination.  It has been rebuilt and the main part of town is really commercialized.  We chose to stay at a resort north of the main area, which was really quiet.  We lazed away our days pool and beachside.  We completely loved this resort and Phuket in general. The resort had activities which we took part in – yoga, pizza making, scuba diving, Thai boxing, etc.  Other than that we relaxed and did very little.  Our room had a kid area with bunk beds and a PS3 so Keegan was in heaven playing video games whenever he had a chance.  We all joined him from time to time.  The front desk rented movies so we watched some movies as well.  After the relaxing week we are ready to hit China.  Steve has us booked the whole first week for Kung Fu twice a day 2 hours each session.  That will be interesting  .  .  .  .

Here's Keegan teaching Steve some of his skills

Steve and Keegan enjoying the pool

Keegan chillin' in one of the pools at the Holiday Inn Resort Phuket, Mai Khao Beach.

The beach we were on was so beautiful and peaceful 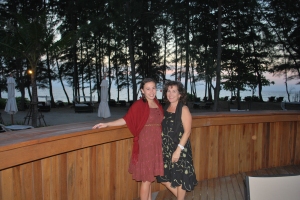 Me and my daughter heading out to dinner on the beach; Phuket, what a beautiful place!