More New Friends Down Under and Koala’s – Brisbane, Australia

Since we are now in…Australia!!!! (I love yelling that.)  We decided that since Australia was so huge we would just stay in the Queensland area and explore. At the campsite on one of our first nights in Australia we met a number of really nice and fun families. One of the families was even nice enough to invite us to their house for a night! People sure are friendly in Australia ;)! They have 3 kids, two boys, Jacob (12) and Lachlan (10) and one cute little girl named Maleese (7). When we got there we got the tour of the house and attacked… with kisses by their ADORABLE dog, Lily – love at first site 🙂 . 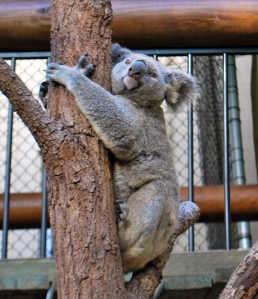 The cute koala just hanging out! Even though you hear koala “bear” sometimes, they are not bears at all they are marsupials, or pouched mammals.

Koala on the move! Koala’s are nocturnal animals and they sleep up to 18-20 hours a day.

They knew of a conservancy that held koala’s!!!!! So we all hopped in the cars and headed to the koala’s! They were so cute, and furry, and moving! We actually saw one climb . . . no, scoot down the tree and then crawl across to get some more leaves! It was a very nice way to see the koala’s that we had been looking for since being in Australia. Along the highways there are signs for koala crossing and we had been on the lookout. We found out that koala’s are threatened in Australia because they need a lot of space, about 100 trees per koala, and with the woodland areas shrinking in Australia so is the population of the koala.

Our group then headed off to a really good look out point to get a great view of the sky-line of Brisbane, thankfully there was a park to play on so when the parents talked we played! 😉 Once we got back we hung out around the house, and then had a typical Australian dinner on the barbie! It was delicious! Afterwards, while the parents did what parents do (talk) we kids played hide and seek in the dark…very nerve racking.  Since it was, say . . . midnight, we decided it was best if we got ready for bed.  In the morning we got to eat incredible egg and bacon breakfast sandwiches made on the barbie!  Before we left we got to do one more fun thing and that was ride their bikes to the parks in their neighborhood. Keegan and Jacob were on a tandem bike…let’s just say there was a lot of screaming on that bike . . .lol! It was such a fun experience to hang out with them; it was a great way to end the tour of Brisbane and we hope to see our friends again when they visit the US.

The authentic Australian barbie by Mike our grill man.

I tried out the authentic Aboriginal instrument; the didgeridoo.