“Ehhhh ohhhh eeeeeeeh aaaaaah”, think of the sound a donkey makes, that is the same sound we heard when we went to visit the penguins on Boulders Beach in South Africa. On a fine Wednesday morning we were off to see the African Penguins (Jackass Penguins as they are also known). While we were there we got to see the habitat that they lived in, the different safety tactics that they have and tons of new facts about penguins. As we have been traveling we have learned a lot about different animals, but so far the penguins are my favorite.

A few facts I didn’t know:

We saw the little cuties at their home on land. When they first came to Boulders Beach back in the 1980’s they trampled a lot of the vegetation that was there. So the National Parks Department decided that they would fence off certain areas to begin a process of growing stronger vegetation throughout the area. When the fenced areas were full-grown they then took the fence down and let the penguins eat and live in that full-grown area. Now they are living in a sea of green thanks to the help of the South African National Parks Department. They also added little bucket type shelters, fiberglass igloos, that lay on their sides and are used as little houses to help with severe environment conditions, protection for them, their eggs and chicks and to encourage reproduction.

It’s an amazing thing to be so close to these wild animals and they don’t seem to mind.  It’s like any other bird you might come across on a path in your home town.  Let me say that penguins have good taste in where to live – Boulder’s Beach is made up of huge boulder’s it looks like a movie set.  Among these boulders are all these cute little penguins, about 3,500 live here.  They are as gentle-looking as all the ones you see in the movies – the only thing is they do smell quite bad, good thing for the breeze and that they are soooo cute!  A man we talked to at one of the stores told us that every morning he has to make sure to check under his car in case the little munchkins are running around underneath. What a difference from our home, where we look for turtles under the car, to theirs, where they look for penguins.

When we were there we were very lucky because they were in the middle of their molting season so they were all there for us to see.  Molting is a big process in how they shed their old feathers and get new feathers. The first step is having to fatten up because when they are molting they cannot eat for 21 days. Let me explain; once they fatten up they go on land and start to shed for 21 days, they cannot swim when they are molting because when the old feathers are coming off they are no longer water proof so they don’t swim and can’t eat because what they eat is in the water.

At the very end on the ride home, we even got to see whales! They were in the water and were holding their fins up in the air for people to see. It was amazing to have witnessed both the penguins and whales in one day.  We are planning another day to see the whales as they migrate. 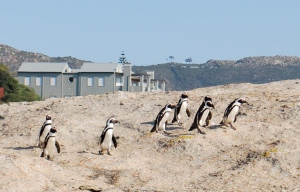 Just to watch them walk is soooo cute!

It was like a movie set, the water was so clear...you can see the little guys coming out of the water 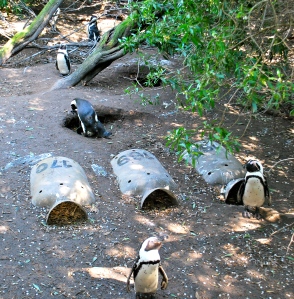 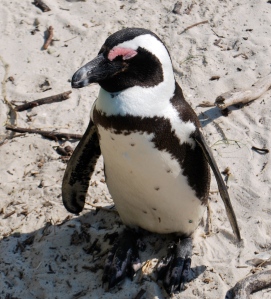 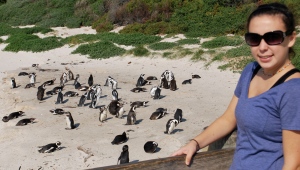 Here I am with a few of my buddies