On a drizzling overcast day last week we decided to go to the Castillo de San Jorge Museum and it was well worth the 3 minute walk (it’s right down the block on our street, Calle San Jacinto, just before you head over the bridge into the heart of Sevilla) and free admission.  I personally loved this museum, it is laid out well with great information and because it’s free I can scoot over by myself and read about something that I didn’t quite understand the last time I was there.  You can see everything in less than an hour.  The museum is under the Mercado de Triana, when they started to renovate portions of the Mercado back in the 1990’s they unearthed some incredible ruins from the Castillo de San Jorge.  For almost 300 years, between 1481 and 1785 this area was the actual Seat of the Holy Inquisition in Spain. The Inquisition was an independent institution of the Church, supported by the Crown to prosecute false Christians and heretics.  The Inquisition was first implemented to remove the remains of Judaism and Islam but not only did they deal with heretics but also bigamous, blasphemers, usurers, sodomites, witches, wizards and clerics accused of sexual misconduct.  An ‘auto de fe’ was the ritual of public penance that took place on the condemned once the Spanish Inquisition had decided their punishment.  The punishment most notably was ‘burning at the stake’ but could have been a number of horrible sentences.  I looked up some of the torture and execution techniques used during this time and one can almost get sick just imagining it.  What is fascinating to me is that as I walk the streets of Sevilla I notice the areas where many of the ‘auto de fe’s’ took place, places like the steps of the Cathedral de Sevilla, the Plaza de San Francisco and the church of Santa Ana which is a few blocks from our apartment.  Places where people now gather to laugh, pray and have festivals; complete opposite reasons to gather than ‘auto de fe’s”.  As I stood there the other day in front of Santa Ana (we went to see a beautiful nativity scene with live animals in front of the church) I tried to envision the terrible atrocities that took place there (I don’t know why) and I imagined all the people that would come and watch these punishments/executions and cheer on the process . . . scary times.

I feel humbled to be in an area with such incredible history right outside my door.

As you start the walk in the museum they have a phrase on the wall that really sticks with you, “Value judgements, abuses of power and the victims of both have always existed in the past, and will continue to exist in the future. This place is part of you. This is part of your history”.

This image became the sinister iconic symbol of the Spanish Inquisition

Inside the museum of the Castillo de San Jorge

A view of one of the Bodega's in the Castillo 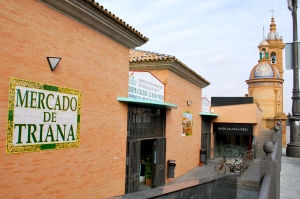 Here's a shot of the Mercado on the left and as you can see the Museum entrance is straight ahead. The building behind the entrance with the ceramic dome is the Chapel of the Virgen de Carmen

Iglesia de Santa Ana - build in the 13th century, its construction began in 1276. Santa Ana was the mother of the Virgin Mary and grandmother of Jesus