Our Jordan guide left us off at the border crossing of Jordan and Israel.  We made it through customs fine and our Israel guide was waiting for us as soon as we got through on his end.

While in Israel, our driver was Muslim, our guide was Christian and they were both Palestinian.  Let’s just say we learned more about this area than we could ever have imagined. Just the simple fact of going through another border into Bethlehem, which is Palestinian territory, is something we did not clearly understand until we got there.  I have chosen not comment on the politics or the religions of this part of the world but I will say; we have met nice people here as we have in other countries throughout the last 7 months.  To be in the Holy Land wasn’t something that we planned to do when we started our trip but we are all happy to have seen what we have seen and the experiences here will stay with us forever.

We got very lucky with our guide in Israel he was born and raised in the location of the 6th Station of the Cross and his wife on the 8th Station of the Cross, he said it just like “I grew up on 27th Street and she grew up on 84th Street”.  It’s amazing to think that places talked about in the bible are still lived on today.  He was so well-informed and openly shared with us answers to all the questions we had, and we had many.

While we were in South Africa, Amy was working with the tour Director, Jasmine at Jordan Select Tours via email to tailor a 2-week Middle-East (Jordan and Israel) itinerary, keeping in mind the time frame we had and the age of our kids.  We are very happy we chose to go with this tour company, the guides were great and they did a great job overall.  Since it would be tough to give a summary of everything we saw in Israel I listed our 2-day itinerary below.  It seems like a lot, which it was, but something else we learned is that all of these locations are pretty close geographically so we saw everything without being rushed. We walked most of our tour in Israel.  Also, it’s off-season so there were very few crowds and we weren’t really slowed down at any site.

Here is the list of religious places we visited:

Mount of Olives, Dominus Flevit, Church of All Nations, Garden of Gethsemane, Western Wall, Old City of Jerusalem, Pool of Bethesda, Church of St. Anne, Stations of the Cross, Church of the Holy Sepulcher (the ancient site of the Crucifixion and burial of Jesus), Mount Zion, Church of St. Peter in Gallicantu, Tomb of King David, Room of the Last Supper, Church of Dormition, Church of John the Baptist, Russian Orthodox Church, Shepherds Field, Manger Square, Church of the Nativity and the Milk Grotto. 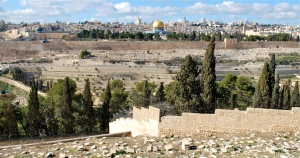 I took this picture from the Mount of Olives. I thought it was so interesting because you can see the Jewish grave-sites immediately in front of us (there are many more which you'll see in the next picture), then after the trees you can see a number of walls, one after the other, that's the Christian grave-sites and after that right in front of the farthest wall are all the Muslim grave-sites. Now if you look at the wall on the right side you will see the Golden Gates (said to be where the Divine Presence appeared and where the Messiah will return). Behind the wall you see the gold dome which is the Dome of the Rock. If you look to the left you can see the black dome which is the Church of the Holy Sepculchre. The Kidron Valley separates the Mount of Olives from the Dome of the Rock. 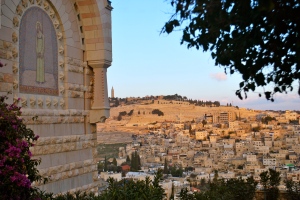 Now here we are on the other side of the wall looking at the Mount of Olives. You can clearly see all the Jewish grave-sites leading up to the Mount of Olives from this shot. The church on the left is St. Peter in Gallicantu Church. 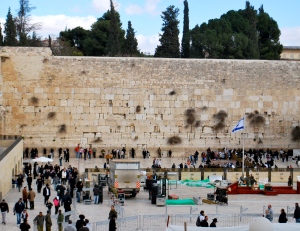 The Western Wall or Wailing Wall (men on the left, women on the right). It's said that construction started back in 19 B.C by Herod the Great. 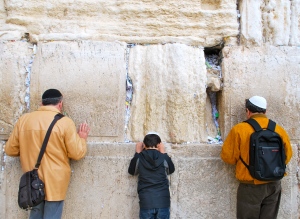 Keegan decided he wanted to say a prayer.

The site of the First Station of the Cross. The arch above the entrance has thorns carved into the stone depicting the crown of thorns. 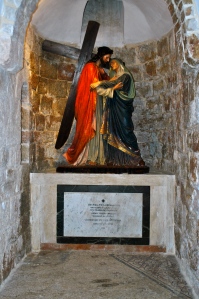 Jesus meets his Mother at the Fourth Station of the Cross. Some believe that the footprints on floor are where Mother Mary stood. 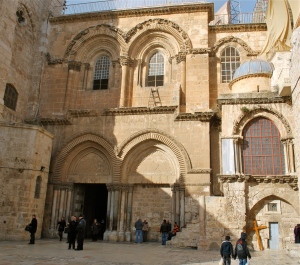 Coming upon the Church of the Holy Sepulchre where many believe Jesus was crucified and buried. 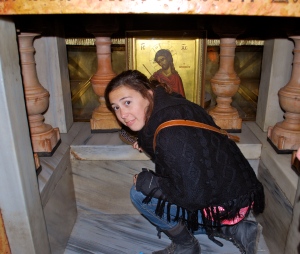 Beneath the altar there is a hole many people believe is the place where Jesus' cross was placed and raised.

The Stone of the Anointing, also known as The Stone of Unction; many believe this is the spot where Jesus' body was prepared for burial after his death. 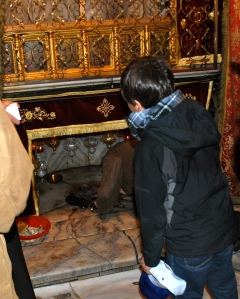 Keegan in line about to touch the spot where Jesus is believed to have been buried.

The Tomb of King David, located at Mount Zion.

This was the path-way said to have been the path Jesus took with his Disciples after the Last Supper and then crossed the Kidron Valley and it's the same path-way Jesus walked after he was arrested and he was taken to Caiaphas the High Priest.

5 responses to “Jerusalem and Bethlehem – Israel”