Okay so if you have read my previous blogs then you know how I always start … kind of like this “Hello again” or “Hi People”. Today though will be different! Well, maybe not thaaat different. 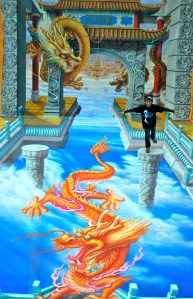 NEE HAO (that’s hello in Mandarin).  While we were in China we made SUPER GREAT friends that we ran into everywhere, their names were Paul and Anna! They are from Manchester, England.  We first saw  (and met them) in Chengdu at the Research Base of Giant Panda Breeding Center. We hit it off right away, they are traveling for 10 to 12 months and started on January 1st! They were really funny and they just happened to be staying at the same hostel as us.  One day we went to a face changing opera and they were going to go depending on how we liked it (F.Y.I It was pretty darn awesome but save that for a different blog!), and we loved it! So then we talked more and more and we learned they were going to many of the same places in China that we were going.  They were going to see the Terracotta Warriors one day and then they were going to Beijing so we decided to meet up with them in Beijing. When we were leaving the Terracotta Warriors I saw someone who looked just like Paul so I tapped him on the shoulder and said “hey don’t I know you” and then I was like “ HEY you’re Paul” they ended up seeing the Terracotta Warriors the same day we did. On one of our last… ‘Get togethers’ we went to … drum roll please… KTV!!! A.K.A Karaoke!!! It was a BLAST so how it works is… 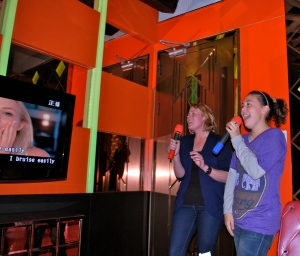 That's Kendal and Anna, they sang a number of songs together 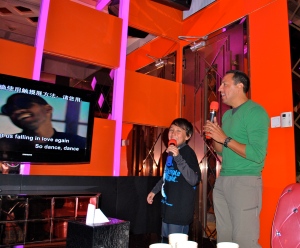 That's me and my dad letting loose 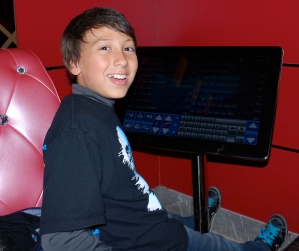 We all took turns at the control center for song selection

In the room they have two nice leather couches, two microphones, maracas and a tambourine! Then they have (off to the side a little) a huge touch screen TV so you can pick your songs. They have a ton of songs but some very important songs to me were missing like Moves Like Jagger By Maroon Five and Party Rock Anthem By LMFAO!!  They did have a lot of cool songs too and we all fought over who could sing next. They had an interesting selection of food for us but I stuck to the Fanta and fried rice. If you have never tried karaoke you need to try it because it is great fun! 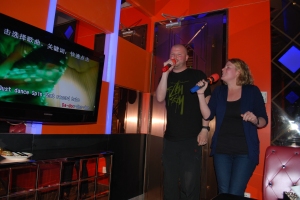 This is Paul and Anna showing us how England throws down

My conclusion for this blog is that we made some new great friends and also had an incredible time at the KTV!!  We hope our new friends visit us when they hit the USA! 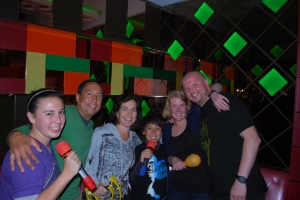 What a great night of Karaoke with good friends Anna and Paul from England!