The fun part of a big city like Beijing is that there is so much to do.  We saw all the major attractions as well as touring the Hutongs, seeing an acrobatic show, visiting both the Bird’s Nest and Water Cube (where Michael Phelps made history), having dinner with our new friends we met on the Li River cruise and trying the famous Peking Duck.

We took this picture in one of the much nicer and cleaner Hutongs we visited.

Within Beijing there are small pockets of neighborhoods that did not get torn down when the huge high-rises were being built.  These old neighborhoods are called Hutongs.  They are narrow street areas that often don’t have individual plumbing.  The people go to a central bath and shower area.  Amazing in 2012 with huge buildings surrounding these neighborhoods that some are walking down the street to use the bathroom.  We took a walking tour of the Hutongs to learn a bit about the history.  The morning of our tour we woke to a snow covered city.  One of the saddest parts of Beijing for me was the pollution – everywhere you looked it was grey and haze covered.  The day it snowed it seemed to have washed out the pollution and it was a clear beautiful morning.  The difference was staggering. 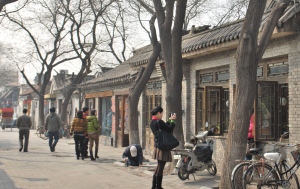 This was the typical view from our hotel window.

This was the day after it snowed, unfortunately this only lasted for that day.

One evening we went to an acrobatic show.  It was so much fun – I think this is where cirque du soleil got their ideas.  Some of the girls seem to have no spine the way they bend and the men and women are so strong.  The grand finale included a huge steel ball that eventually fit 6 lit-up motorcycles racing inside at high death defying speeds.  They would add one motorcycle at a time and the suspense each time they added another was so much fun.  That was a great night of entertainment.

The grand finale was incredible!

We were lucky to be invited to dinner by the family we met on the Li River Cruise; Frank, Karen, Isabelle and Jacob.  We had a great time getting to know them, comparing travel notes and learning a lot more about China.  As travelers they also know what it’s like to be in need of laundry services; they immediately told us to bring a couple loads of laundry and offered the use of their washer and dryer. (Laundromats are not as common to find as one would think).  The dinner they gave us was incredible; great Chinese cuisine.  What we enjoyed most that night is just getting to know another incredible family on our travels.  There are great people in this world.  They also gave us “the” place to go to have Peking Duck in Beijing. 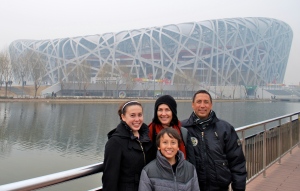 The National Stadium - also known as the Bird's Nest

We kept putting off going for our duck dinner and we ended up going our last night in town.  We told our taxi driver the name of the restaurant and we asked him to drop us there.  The thing about taxi drivers in China is they don’t speak English (obviously, we’re in China).  We need to have our directions written in Chinese so the driver can read it.  He dropped us off in the relative area where the restaurant was but then we had to walk – he told us that while grunting and giving hand gestures. The part of town that the restaurant was in was very charming so we walked a bit and eventually found the restaurant.  It was packed and there was a sign at the front of the door that said “FULL/CLOSED”.  And there was also a women telling us they were closed and it was full.  We decided to walk inside if anything to get a peek at this place.  As we walked up we saw many, many groups waiting to be seated I was ready to walk away but Steve decided to try to talk with the hostess.  Well I’m not sure what happened but whatever Steve said worked.  Somehow she sat us immediately.  The dinner was a lot of fun in a beautiful lively restaurant.  They bring the duck to your table and carve it right in front of you.  You eat the duck with thin pancakes – it felt like making a taco.  The duck was delicious and we all had a fabulous last night in Beijing. 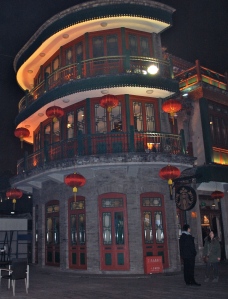 So many neighborhoods in Beijing are simply beautiful!