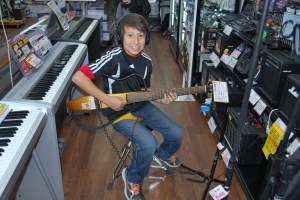 I'm checking out this "sweet" electric guitar in Electric City.

Hi again Tokyo, Japan is an awesome city with tons of stores filled with electronics.  On one of our outings we went to a place called The Sony Centre. In the center it had about 4 floors showcasing all of their new technology ranging from cameras to video game consoles and everything electronic in between. There was this very cool video camera that took video and also the camera is like a mini projector. Okay so what I mean is that after you record your activity or event you can watch it on the wall or on a pillow in a dark room. It was very, very cool. I am so glad that my parents planned this trip for us because if they didn’t I would never have been able to see all of the cool technology. They had some 3-D TVs and some very cool computers. But my favorite was one of the hand-held tablets it isn’t even out in the United States it was called Sony Tablet P. The Sony Tablet P was super cool it was like a Nintendo D.S that gives you internet access as well, with two screens one on top and one on the bottom except it is a touch screen on both of the screens and they create one big screen, unlike the Nintendo D.S where only the bottom screen is touch. It is also like an I Phone because there are different screens that you can slide you finger to get to them.  Another day we went to a place called Akihabara also known as Electric City and each store they sell a different type of electronic then the other. They also have something like a pager except it is like a mobile WI-FI hot spot which was good because they don’t have like any WI-FI any where without paying for it. That store had at least 8 floors of stuff and one floor was TVs and there was another that was all video games and kids toys. On the TV floor my dad and I got to play Halo on the Xbox in 3-D and it was awesome.  While in Akihabara we went to a restaurant that had waitresses dressed up as maids.  Ask me about that some time!!!  Japan is a really fun city to explore. 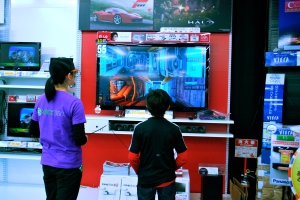 Testing the XBOX with the XBOX girl!!

Serious gaming kids come in the store with their stack of Yu-Gi-Oh cards in a nice case. Then they sign in to a large game console like you see. They place one of their cards down on the screen and the screen reads it and then they choose how to battle the console. It was so intense!

Here's one of the maid-girls I was talking about. They all have high voices like cartoon character. We went and saw them perform and had an ice cream. I thought it was way overpriced and I it was "awkward" so I won't be doing that again. 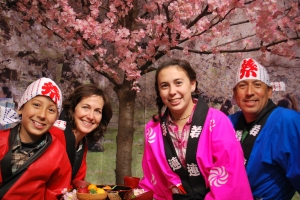 They had this Hanami scene (picnic) set up in the Sony Centre and they asked us if we wanted to put on the costumes. Of course we did!!!