Cathedrals and Palaces in Spain

All of these sites deserve their own blogs – they have so much history, character and personality of their own.  Unfortunately, we are heading out of Spain and it’s time to get these blogs posted.

The Giralda and Cathedral of Seville – There is a mausoleum with the remains of Christopher Columbus in the Cathedral.  Part of his DNA was sent to Huston, Texas and it was confirmed that his remains are here.  He is held up by 4 Heralds representing 4 Kingdoms, it’s an amazing display. The Giralda is the Minaret – built between 1184-1198 for the Mosque of Seville.  Minarets provide a visual focal point and are used for the call to prayer. The muezzin would ride his horse up the ramps of the 98 meter tower to call for prayers, 5 times a day.  I would consider this to be the center of Seville, we passed the Cathedral countless times during our stay in Seville.  One evening we saw the 8pm bells toll – it was a magnificent sight and sound that we all will remember.  The Seville Cathedral was built over the Mosque of Seville and it is the biggest “Gothic” temple in the world. 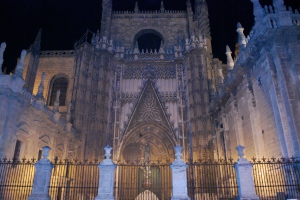 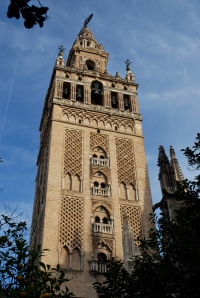 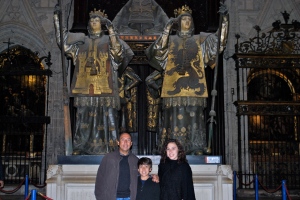 The Alcázar in Seville is a gorgeous site – it is a group of palaces mostly Arabic style but throughout there is some Gothic influence.  It is filled with mosaic tiles and one room is more beautiful than the next.  Kendal felt she was a princess in another life and hoped this was where she lived.  The gardens here are beautiful.  There is a huge labyrinth of 6 foot tall shrubs that the kids ran through for more than an hour.  We went here with my brother and his family and sent him and his wife to the Cathedral – we stayed back with the kids and let them enjoy the outdoor gardens.  It was a fun day. 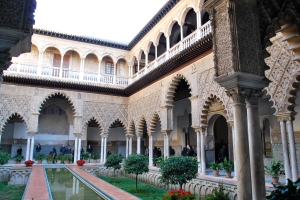 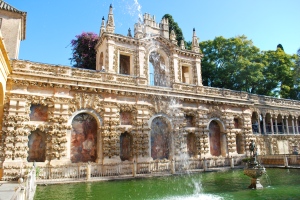 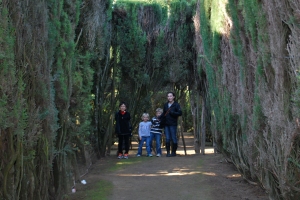 Hiding in the Labyrinth garden at Alcázar 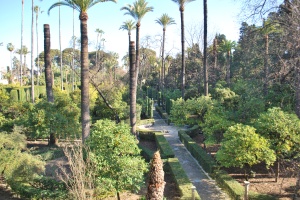 The Alhambra in Granada, Spain.  My understanding is that this location was the last stand for the Moors before the Christians invaded and took it all over in 1492. It is also where Christopher Columbus received the support of Isabella and Ferdinand to sail to the New World.  It is a wonderful retreat.   We took a day trip by train with my brother and his family.  It is a very busy place and they only allow people to enter morning or afternoon.  We arrived at 11am but were not allowed in until 2pm.  Visiting the main palace is dependant by the time they give you.  We were given 4pm, our train left at 5pm.  We considered trying to get a peek and running to the train but people were in line at 3:30 – a lot of people!  Rather than be rushed we skipped it.  The Alhambra is really an estate with multiple castles and gardens.  The scalloped windows frame the beautiful views of Granada and the snow-capped mountains.  A huge part of the Moorish influence is the gardens and their water features.   Water was the purest symbol of life to the Moors.  It’s truly a beautiful site and even more are the views of the surroundings snow-capped mountains.  Hope you enjoy the photos 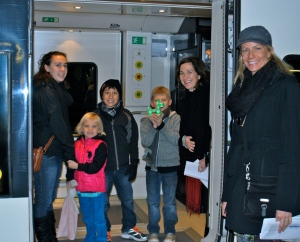 On our way to Granada

Beautiful water features at the Alhambra 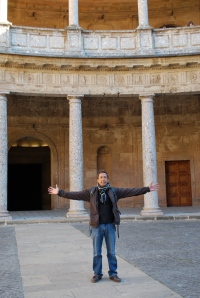 In the Palace of Charles V 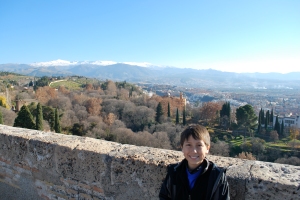 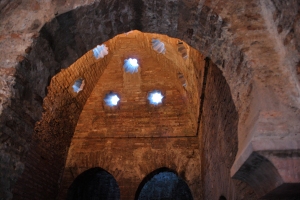 Inside the Roman Baths at the Alhambra 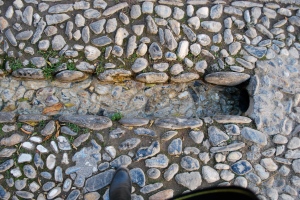 2 responses to “Cathedrals and Palaces in Spain”