Unfortunately or fortunately it is not bullfighting season in Spain, it typically starts up around Easter and goes through to the end of summer, with a few exceptions throughout the year. This time of year the bullfighting moves to South America and Mexico.  We did however take a walk over to the main bullfighting ring here in Seville, Plaza de Toros de la Maestranza, for a tour.  This ring was constructed during the 17th and 18th centuries.  It was very interesting to learn more about this deep Spanish tradition of bullfighting, like how it was a sport that took place for Spanish Kings and Royalty back in the 8th to 15th centuries, it changed during that time from a fight on horseback to a fight on foot. Before the bullfight came to Spain it’s history originated from the sacrificing of bulls in ancient Greece through Roman times.

We weren’t allowed to run around the ring like I wanted to so that was a little disappointing.  I always thought they had locker rooms, so I was hoping to check out where the matadors get psyched up but they have no locker rooms . . . they get dressed at home or if they are visiting, at their hotel room.  I think if it would have been bullfighting season Keegan and I would have gone to see one but I doubt we would have enjoyed the long brutal process.

On January 1, 2012 a ban of bullfighting in Catalonia took effect.  Barcelona, which resides in the Catalonia region, saw their last bullfight at the end of this last season on September 25, 2011.  A lot of controversy surrounds this topic in Spain; some believing with great passion in preserving this deep tradition and others want to eliminate the barbaric nature of this sport. The fight to ban bullfighting in Andalucia (Sevilla falls within this region) will be a tougher battle due to the much stronger support of maintaining all their deep traditions and how they view this has a pure art-form. Only time will tell . . . 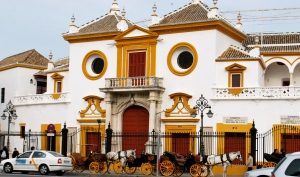 The entrance to the Plaza de Toros

Kendal in the museum 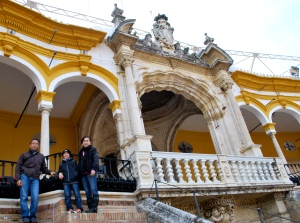 In front of the area reserved for royalty, that's as close as they'd let us non-royals get.

The ring just begging us to run around on it

This beautiful chapel is located right before the matador enters the primary door to the ring. It's the matadors time to say his prayers.

Here is the "Puerta Principle" the principle or main door to enter the ring. We tried to lose our guide so we could sneak in the ring but she was watching us too close.