We decided to rent bikes again and head back into the center of town. We took the route down the Elbe River, which is about a 45-minute bike ride and very beautiful straight into the center. After a short visit and a picnic lunch on the stairs in the city we headed back.  Amy and Kendal decided they wanted to head back through a park and then through the city to the apartment. Keegan and I liked the river route so we said our goodbyes and headed back to the apartment in separate directions. We arrived at the bike rental place (which was a block from our apartment) about the same time; we had a quick beverage at a Biergarten on the river and got back to our place in time to meet our landlords. They had invited us to go with them to a water park about 20 minutes away in a neighboring town of Pirna. The water park was very large and quite amazing.

NOTE: Historical portion of my blog, some may want to skip.

From early 1940 until end of June 1942, a portion of the very large mental asylum within the Sonnenstein Castle, overlooking Pirna, was converted into a euthanasia killing center: the Sonnenstein Nazi Death Institute. Specifically, in 1940 and 1941, the facility was used by the Nazis to exterminate around 15,000 people in a process that was labeled as “euthanasia”. The majority of victims suffered from psychological disorders and mental retardation, but among the 15,000 that were killed a number also included inmates from the concentration camps. The institute was set up after the beginning of WWII as part of a Reich-wide, a centrally coordinated and largely secret program called “Action T4” or the “elimination of life unworthy of life” or the killing of what the Nazis called “dead weight existences”.  The Pirna Sonnenstein Memorial Site stands today as a commemorative to these victims for what horrendous actions they faced from this war.

Pirna had been victim of a terrible flood back in 2002 and had rebounded well as far as cosmetically from that very destructive flood. However, this town, as beautiful as it is, never fully rebounded from the effects of separation of East from West back in former times. The manufacturing and industry that was so strong back in the day never really ignited again. So most the people who live here travel about 40 minutes to work in Dresden or other towns.  However, being here first hand I can tell you that this is another beautiful town in Germany, very clean, well-kept and full of history. The origins of the buildings here range from as early as the 1300’s – quite unbelievable.  Jurgen and Ursula bought the kids ice cream cones to top the evening off; they are very kind people. In fact after we got back to the apartment and the kids settled down, Amy and I went to Jurgen and Ursula’s home and they helped us plan our next days travel plans to the Saxon Switzerland National Park. In their house, that they renovated in 2000, stood a stand-alone limestone doorway frame. It was the original doorway to this home back in 1865, it was so incredible that it still stands today and all renovations were done around this true “masterpiece”!  This was another nice night with very warm people. 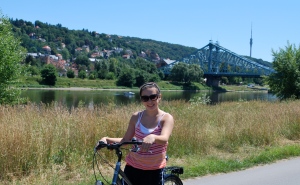 Kendal on the Elbe River

The famous Furstenzug mural (on the right) - made out of 25,000 porcelain tiles and is over 335 feet long

Our kind landlords in Dresden at the water park 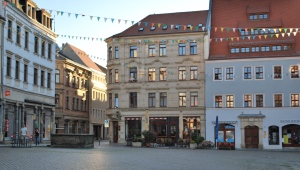