Well I’m not going to start like I did last time, that’s for sure.  I am going to go straight out and tell you. Well first I woke up (that’s a no brainer) then I had a scrambled egg breakfast that my mother made me. After breakfast Dad and me went to a German haircut place to get my Dad a hair cut (which I don’t think he needed). After we left he said he asked the barber to shave his head to a zwei clippers (which is two in english) and held up his thumb and pointer finger.  But the barber gave him a one. So once we were walking back to our apartment he asked, “This looks like a one doesn’t it? I asked for a two.” But then I told him “You put up two (in German) on your hands, but you said ein (which in english is one).” Then he said, “I did, I thought I said zwei?” “Nope you said ein”.  So that day he got one heck of a haircut. We didn’t do much until 12:00 sharp except for my Dad did his shoulder exercises which include bending forward and putting his right arm in front of him and spinning it one way then another because he said he hurt it playing basketball. We got the internet fixed at our apartment at 12:00 sharp. So we were online doing whatever for about 1 hour then we took a break at around 1:00 and we had lunch.  Then we went back on the computer for a little while longer. At around five o’clock we took the UBahn subway to the zoo (we didn’t go in but I wanted to) and walked to the Tiergarten (it is like New York’s Central Park) to meet Steffi who was going to run in a relay race. We were about to get on a bus to take us there but then she called and said that it might rain so you don’t have to come so we didn’t go. 😦 But then since everyone was hungry and it was raining we went to an Italian restaurant to have dinner. It was delicious!!!!!!! Then we went back to our apartment and Skyped with some people and then we all went to bed. 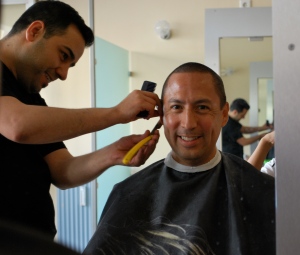 Here's my Mom in one of the gardens in the Tiergarten